2048 Game Girls Choice For Windows Desktop is a ported version of the mobile game with the same name that has created a few additions among those who like math puzzles.


Simple interface for a minimalistic game

2048 Game Girls Choice For Windows Desktop provides the exact same gameplay and a similar look to that of the original mobile game. The goal is to move numbered blocks in a 2D space, on all directions, to overlap and add their values until one reaches 2048.
The game consists of a 4 by 4 board, on which new tiles always appear at the opposite side of the direction you last used. For example, if you move all the blocks upward, the new blocks will appear at the bottom, if moved to the left, fresh numbers appear at the right side of the board.
2048’s interface is kept simple and clutter free, making it relaxing to play. The game also comes with a consistent tutorial that can be accessed from within the GUI if things aren’t all that clear to you.

This version of 2048 allows you to increase the size of the board from a simple 4x4 to 8x8 and 16x16. It certainly makes it a lot easier to reach 2048 this way but they can be used to see how much further you can go.
Moreover, there is a lot more to take into consideration when adding the tiles. 2048 is designed to be a puzzle game and it really counts which tiles you merge and on which directions you move them. Since there will be a lot more tiles to work with, it will certainly take more consideration when translating them.

To sum things up, 2048 Game Girls Choice For Windows Desktop doesn’t reinvent the game. It keeps its core as it should be and adds the larger boards to test and challenge yourself a bit more. It’s a good game to have around when you need to pass some time by. 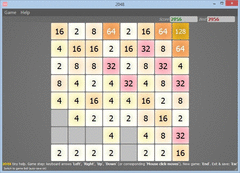 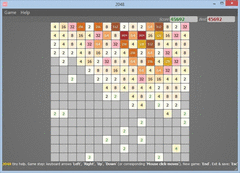 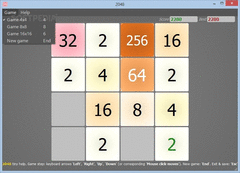