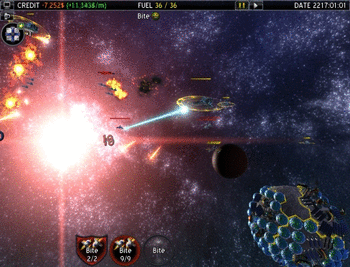 Name: Light of Altair
Works on:

Light of Altair is a sci-fi colony building game with a deep plot. Grow colonies from landing pod to metropolis, while sending off new spaceships to expand your territory to other worlds. You are not alone in space, 8 factions from different parts of the world are all following their own agendas in the solar system; diplomacy and orbital-combat are essential to learn.Light of Altair is based on a custom built 3D engine that enables easy zooming from galaxies all the way down to individual moons and asteroids covered in the colonies with their glass domes, mines and launch pads. Advanced shader technology is used to add rich details and lighting to surfaces.

Colony building on planets and asteroids throughout a system.Manage industries and colonists to grow from a tiny landing unit into a towering city.Detailed storyline based on a future-history of Earth.Rich single player campaign traced across the galaxy.Play out important plot events from different sides taking on the role of one of 8 different factions.Detailed tech-tree with over 30 weapons, buildings, and ship-mods to discover.Design ships: Pick a ship schematic and equip weapons, armour and mods to hardpoints. Then command shipyards to build a fleet from the design.Cinematic camera views of space battles in planet orbit.