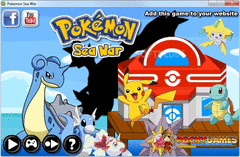 Few cartoons are as popular all over the world as Pokemon is, especially when you consider the fact that it was first released quite a few years ago. The series has evolved a lot in the meantime, and it may not have too much in common with the original show, except of course for the Pokemons and the characters. Now, youâ€™ve got the chance to play with them yourself.


Protect the Pokemon center from the invaders

Pokemon Sea War is an arcade artillery game in which you have to control Pikachu and his water Pokemon, in order to defend the Pokemon center thatâ€™s under attack. Each level consists of a single wave of enemies, and you must destroy them before they get the chance to do the same to you by using ranged attacks. The fun part is practicing your aim, because it takes a while to get used to the mechanics.
As such, your Pokemon can hold a limited amount of ammunition, and you must go back to the center to reload. In order to shoot, you must hold the mouse button down and release it when you are satisfied with the amount of power. Naturally, the power bar oscillates wildly and you need to practice your reflexes in order to get it right every time.


Use the money on a variety of upgrades

After each successful level, you are rewarded with a certain amount of currency, all of which can be used in the upgrade panel. Here, you have the opportunity to improve your shot damage, increase the reload speed for your Pokemon, as well as reinforce the Pokemon center with extra armor to protect it from enemy attacks. Obviously, the upgrades get significantly more expensive as you manage to advance through the levels.
As far as the technical aspects of the game are concerned, the graphics engine two-dimensional and looks about as simple as you would expect. However, the colors are nice and the Pokemon look exactly like they did in the anime series, more or less. Itâ€™s still pretty basic, on the other hand, so donâ€™t expect anything too fancy either.


A nice experience for Pokemon fans

Although Pokemon Sea War is designed to be enjoyed by small children, everyone can get a few minutes of fun out of it. However, the repetitive gameplay and the reduced number of upgrades make it difficult to keep playing for extended periods of time. 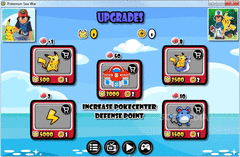 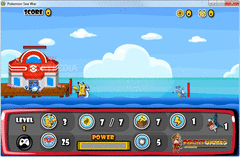 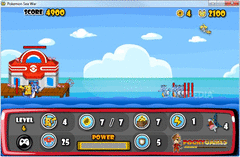 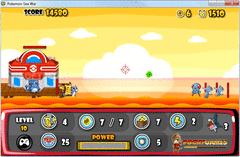 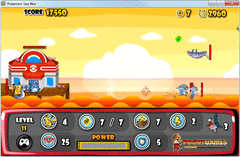