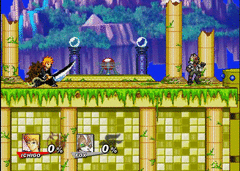 Super Smash Flash 2 is a 2D fighting game that borrows many of its elements from the popular Nintendo franchise, Super Smash Bros, and offers an extremely similar gaming experience with a few unique features.

For example, despite having a very similar aesthetic (especially the entire menus), Super Smash Flash 2 uses an 8 bit visual style that will make all the retro-gamers very pleased. The animations are pretty good too; its a real treat to watch them move across the stage.

One of the most important parts of this type of game is its cast of playable characters, and Super Smash Flash 2 does not disappoint. Goku, Naruto, Sonic, Mario, Link, Pikachu, Kirby, Ichigo or a black mage from Final Fantasy are just a few of the names that you will find.

There is also a wide range of arenas where you can fight. There is not only one scenario for each character, but several different ones that you will find really entertaining. Each, of course, comes with its own surprises.

The game's controls are just what you would expect: two attack buttons that can be combined with any direction key to perform over a dozen different attacks. The goal is as always: to throw your enemies out of the arena after beating on them.

Super Smash Flash 2 is an excellent fighting game that has the potential to provide fun for hours, and that is just it's beta! 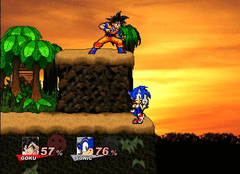 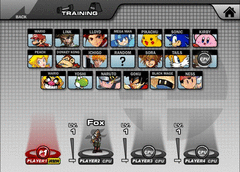 Escape from Jay Is Games