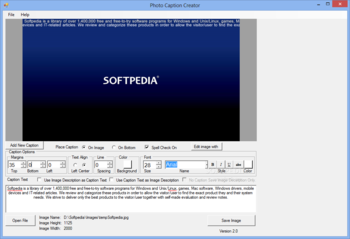 Photo Caption Creator is a software application that gives you the possibility to seamlessly add text captions to your image files. It offers support for JPEG format only.

After a speedy and uneventful setup operation, you are greeted by a large window with a neatly organized structure, representing Photo Caption Creator's interface. It doesn't put emphasis on appearance but it's easy to navigate.

Once you open a JPEG image, you can preview it in the main window and enter the caption text to view changes in real time. It can be placed on the image or beneath it without overlapping.
It's possible to edit the caption top, bottom and left margins, align text to the left or on the center, customize the background color, change the font size, name, style and color, as well as use the image description as caption text or vice versa. The new photo can be saved to file by indicating the output directory and file name. There are no other notable options available.

We haven't come across any stability issues in our tests, thanks to the fact that the utility didn't hang, crash or prompt error dialogs. As expected, it had minimal impact on PC performance, running on low CPU and RAM. Too bad that file support is not extended to other formats, like PNG, BMP, GIF or TIF. On top of that, bath processing is not possible.
Although it doesn't integrate rich and versatile customization parameters, Photo Caption Creator offers a simple solution for embedding text in JPG images, and it can be used by beginners.