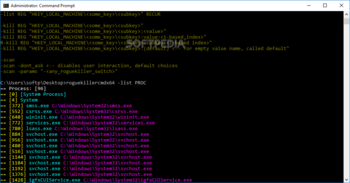 If you're concerned about your computer's security, you might've heard about RogueKiller and understand its role in removing unwanted components from your PC or killing invasive processes.
However, sometimes you might not afford the luxury of a graphical user interface or want to automate some of the processes, and that's when RogueKillerCMD steps into action.

As its name clearly suggests, this application doesn't fashion a graphical user interface (GUI) but provides you with a command-line interface (CLI) instead.
Although it might not be as easy to use as its GUI counterpart, it certainly grants users more freedom regarding process automation and executing tasks without a standard user interface (for instance, when booting in Safe Mode with Command Prompt).

In order to run this application on your computer, you need to provide it with administrator rights. However, doing so by right-clicking the icons and choosing the "Run as Administrator" won't trigger the expected effect.
You must launch a CMD with administrator rights, navigate to the utility's location and run it by typing its name in the CMD window manually. However, just by doing so you will receive a list of arguments that you could combine to perform various operations.

You can use RogueKillerCMD if you want to view a list of active processes or services on your computer, terminate them without much hassle, or scan your computer for unwanted files or corrupted registries and delete or fix whatever necessary.
Unlike other similar software, this one adopted a colorful CMD scheme, so that it's easier to view process IDs, their names and the location of the files. Mind you that performing a complete scan can take a long time, depending on your computer's hardware specifications. At the end of the scan, you will be prompted to remove suspicious files or corrupted registries.

All in all, if you're a fan of RogueKiller application and would prefer using its features from CMD, you can give RogueKillerCMD a try. It requires administrator rights to run and despite its lack of an intuitive GUI, provides you with more freedom regarding process automation and offers you the same powerful features of RogueKiller at the expense of a standard GUI. 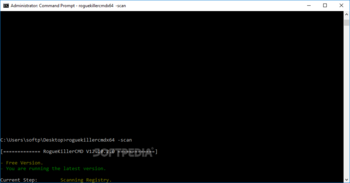 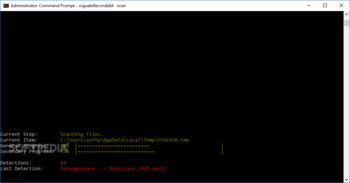