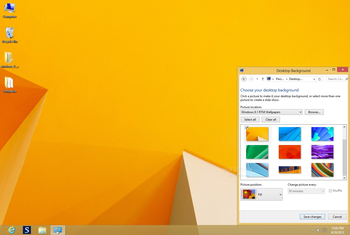 Windows 8.1 was the first update that Windows 8 got after its launch in October 2012 and it featured plenty of under-the-hood improvements that were meant to increase its overall performance. Additionally, some changes were applied to the Start Screen and a Start button was also introduced, while the included themes were modified as well.
Some of these adjustments were visible in the RTM (Released To Manufacturing) version of Windows 8.1, and those who were only interested in the new wallpapers no longer needed to install the new OS edition since they could instead download Windows 8.1 RTM Wallpapers.


A collection of colorful wallpapers

This package basically includes 9 images that you can use as the background of your desktop - also, if you are already running Windows 8, you can also adjust the taskbar and titlebar color according to each picture.
The provided wallpapers are fit for wide monitors, as the resolution for most of them is 1920x1200, 96 dpi, so they will look good on your screen, no matter its size.
There is also one image that can be used as a wallpaper for dual-monitor systems, as it will stretch on both of them, which means that you will not need to manually select a background for both your monitors.

You can set any of these images as the default wallpaper, or you can set the entire folder as the default source of the desktop wallpaper, then set the rotation period to your liking.
As previously mentioned, these images were released to the public once the RTM edition was published, and 8 of them made it to the final version of Windows 8.1: 7 of them are part of the Lines and colors theme, whereas one of them is provided within a separate theme, simply called Windows.
Needless to say, if you no longer want to use these images as your desktop background, you can just delete the folder and select a different image.