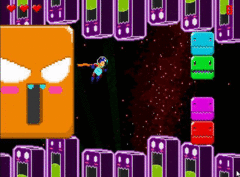 
Rating: 2.4 out of 5 based on 20 user ratings
Downloads: 476
License: Free
RacketBoy is a free game by Double Dash Studios and works on Windows 10, Windows 8.1, Windows 8, Windows 2012.
You can download RacketBoy which is 38.93 MB in size and belongs to the games category Sidescroller, Shoot'em up, Casual, Arcade, Action/Adventure.
RacketBoy was last updated on 2017-04-26 and is currently at version 1.

Right off the bat, RacketBoy is that kind of lightweight indie game that’s addictive and not just that. It’s a game jam build, Indie vs. Gamers to be precise, and it’s one of the best I’ve seen. Not only because it blends two very popular arcade genres, or because it has a unique look, but because it has tons of personality.

The game idea is simple and inversely proportional from a creativity point of view. You’re a space dude who flies around and hits enemy projectiles back at them using a laser racket. One of the many whimsical things you’ll spot is that the first waves of projectiles are actually ‘laid eggs’ from floating ducks that are very cute.
In fact, the entire game is one big collection of comical encounters, form simple enemies to the giant bosses. Pink squids shoot lasers, giant bananas want to kill you, and even a futuristic blow fish joins the fun. Visually, although RacketBoy might not be great in production quality, it makes up for it with creativity.

Shoot’em ups and bullet hells are challenging games by default, add a bit of block breaker mechanics and you have a recipe for success. More so since it’s way outside the box. The gameplay mechanics are rock solid for something that was designed and put together in 72 hours.
At the same time, you’ll have to avoid enemy firepower, use it against them, figure out the best angles at which to strike the balls and try not to get distracted by the cuteness of it all.


Worth a shot any time of the day

To end, RacketBoy is on its road to becoming a full featured game, or so it would suggest since it has a Steam Greenlight page. So, check it out, and if you like it, go vote for it, show your support. 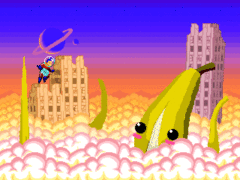 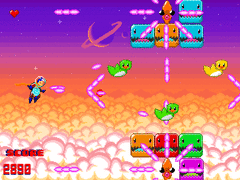 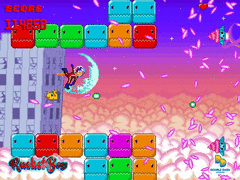