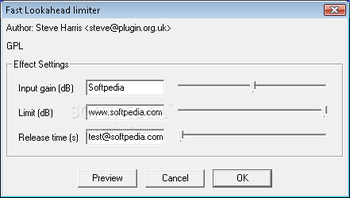 ThisÂ represents a limiter with an attack time of 5ms. It adds just over 5ms of latency to the input signal, but it guatantees that there will be no signals over the limit, and tries to get the minimum ammount of distortion.

Gain that is applied to the input stage. Can be used to trim gain to bring it roughly under the limit or to push the signal against the limit.

The current attenuation of the signal coming out of the delay buffer.System requirementsAudacity