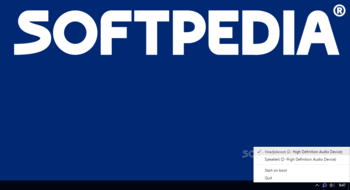 It is often necessary to alternate audio output between several devices, such as headphones, speakers and TVs connected to the computer via HDMI. While this process is not at all complex, it takes more time than many of us would like.
Racket is a fairly straightforward system tray app that can make things a lot simpler, as it enables you to perform this switch with just a couple of mouse clicks. It is easy to use, and it runs quietly in the system tray.


Great tool for those who use multiple playback devices

Normally, changing the current audio output device involves opening the sound properties panel, where you can view all the available playback devices. Obviously this is not ideal if you need to perform the switch very frequently.
Racket simplifies things by allowing you to see and select the preferred playback device from the system tray with just two mouse clicks. It will always be there when you need it, without getting in your way.


If you have performed the Windows 10 Anniversary Update, this utility may not be for you

It is worth noting that the Windows 10 Anniversary Update (version 1607) has introduced a new feature that makes it a lot easier to switch between playback devices. Therefore, if you have performed the update, Racket becomes somewhat obsolete.
Nevertheless, this application is still very useful for those running older versions of the operating system, as well as users who have not yet upgraded to Windows 10.

On the whole, Racket does its job well, providing you with a quick way to change between several sound output devices from the system tray.
It is not particularly useful for those who have completed the Windows 10 Anniversary Update, but users who are still running an older version of the Microsoft OS will find this utility to be quite handy.